When The New Yorker introduced a cartoon captioning contest a few years back, I was an eager participant. After a while, when the winning captions seemed to me to be much inferior to my own entries, I lost interest in playing.*

This week, however, the latest cartoon caused my caption-writing juices to start flowing: 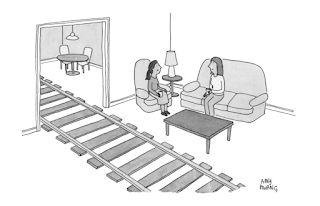 I immediately tossed off the caption “He’ll be here on the 8.06.” And sat back in anticipation of a victory in a few week’s time.

But what I hadn’t counted on was that once the machine was cranked up, it would keep churning out captions. So while I lay in bed last night, these were some of the alternatives that kept me from my shuteye:

“You have no idea how fast the pizza delivery is.”

“The basement was too small.”

“You’ll never guess how my husband and I met.”

“Unfortunately, it’s only a branch line.”

“You just have to remember to “Stop, Look, and Listen.”

“Thank goodness John never had the desire to be an airline pilot.”

“Historically, the house was here first.”

“In 1948 Harry Truman gave a whistle-stop speech in the dining room.”

“Bruce is absentminded. Yesterday he left his conductor’s cap behind.”

“In return, they gave us the dining car concession.”

“The salesman talked Eliot out of getting HO gauge.”

“That draft is from having to keep the house doors open.”

“And I’m married to a stay-at-home husband!”

“The only inconvenience is having to change at Jamaica.”

“Henry got the idea when he was banned for drunk-driving.”

“Next summer we’re going to electrify it.”

“The only downside is the smell from the cattle cars.”

“My husband left without a word last Monday. I figure he’s probably near Cleveland now.”

“The neighbors are so jealous!”

“What makes you think my husband is over-compensating?”

“Unfortunately, my mother-in-law has a Senior Pass.”

* I not only never won the contest, I never even became one of the three finalists. I readily admit that my all-time best entry was topped by an even-more-witty submission.

Picture a prisoner about to be executed by a firing squad. The firing squad, however, is composed of a dog, a cat, several children, and a senior citizen or two (at least that’s how I remember it). Prisoner speaking.

My caption was something like “Boy, you really are the Irregulars.”

The winning (brilliant) caption: “My wife couldn’t make it?”

Posted by normalvision at 2:54 PM No comments:

The Discontent of the Ultrarich

Last month an article appeared in The Atlantic that really pulled at my heartstrings. It revealed, as the article’s title stated in part, that “Many Ultrarich People Aren’t Satisfied With Their Wealth.” (1) As a lover of all mankind, I went into such a right funk about the fact that the ultrarich were not resting easily that only now, over a month later, have I been able to face the situation and seek a solution.

The author of the article, Joe Pinsker, cites many authorities and studies on the subject of the ultrarich and their (perceived) needs. One expert, Brooke Harrington, a professor at the Copenhagen Business School, noted that

the question many rich people ask themselves about their money is not Do I have enough to buy this expensive thing I want? but rather Do I have as much or more than these people I’m comparing myself with?

The ultrarich, in other words, play a game of Keeping Up With the Joneses—but on steroids.

And since it is one of Gotthelf’s laws that “Someone Always Has a Bigger One,” persons caught up in this quest to match the Joneses, can never be satisfied. For once they reach the plateau that Jones #1 is on, looking up they can see a higher level where stands Jones #2. So the yacht that seemed so satisfactory at level 1, is from hunger at level 2.

Pinsker cites the research that Gary Shteyngart did for a recent novel:

Here were people who could purchase anything they could ever want and whose wealth was widely envied, and even they weren’t content.

This can be explained by Prof. Harrington’s observation about being driven by a compulsion:

they feel they must buy in order to keep up their status.

For “feeling wealthy is about comparison with others in your reference group.”

Clearly what the ultrarich need is a new sense of self-worth, which, if one can believe the publishing houses, can be found by reading some of the zillions of self-help books published each year. But since the ultrarich are too caught up in the cycle of chasing ever bigger yachts and houses and cars (2), they don’t recognize the importance of securing a volume whose wisdom might alleviate their distress--that despite being filthy rich, they are still a plateau or two below other filthy rich Joneses.

As I said above, I am a lover of all mankind, and so I have rattled my brain to come up with a solution to their problem. And what I have decided to do is—because the ultrarich are funneling their gelt elsewhere—start a GoFundMe account called Alms For the Rich that would purchase life-changing advice books and give them to the plutocrats for free.

Then, instead of huddling over their Bloomberg terminals trying to outdo their rivals—as Shteyngart discovered (3)— they could all retreat to an ashram and chill out. (4)

3. “One thing Shteyngart noticed after spending time with this crowd was how competitive they were. ‘They’d compete against one another on their Bloomberg terminals all day and then at the end of the day they would play competitive poker with each other,’ he says.”

4. Hell, the Wall Street types wouldn’t even have to travel far. 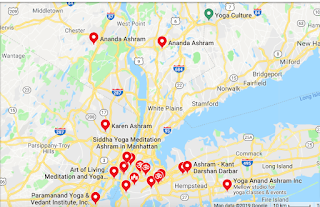 Posted by normalvision at 6:28 PM No comments: