I had a dream last night. I was at my parents’ house, went into the bathroom, reached out with my right hand for the light switch, and ended up pushing against a plastic rectangle where the switch should have been. Responding to my darns and drats, my father poked first his head, then his arm around the door, and with a finger pushed a small lever at the top of the plastic disc—and then there was light!

I mention this dream, though it had no basis in reality, because it seems to perfectly reflect my recent discovery about myself: that I am some kind of semi-Luddite. I say “semi-Luddite” because I am not against new technology, only against upgrades to existing technology.

Take the automobile, for example. I have been leasing the same make of car (and mostly the same model) for many years now. Every three years or so the dealer and/or manufacturer presents me with an offer that provides me with a more expensive car with more horsepower and more features than the one I am driving and all at a lower leasing price (how they manage that, I don’t know, but I remember the punchline of an old joke: “We juggle the books”). When I took possession of the latest incarnation (no pun intended), one of the first things I did was to carry six CDs to the car to load the audio system as I had the previous model. After placing the first disc into the slot and watching it load, I waited for the signal to load the second. No signal. I examined the dashboard carefully for a secret button that would allow me to load the other discs, only to discover that the six-disc changer was gone, its space occupied by the GPS system and an on-board computer that I have no idea how to use. OK, I’ll put my hand up for GPS responsibility. I opted for it, for a few bucks more—even though I never go anywhere. I have programmed it exactly once, and even then I knew where I was going; I just wanted to make sure that I didn’t miss my turn-off, the sign for which is a only slightly bigger than a dishrag. Mission accomplished, I hopped into the car for the return journey, and got only as far as the traffic light at the end of the street, when the GPS female told me to turn around and go back to the address I had just left. I ignored her, but since I had no idea how to throttle her throat, for the rest of the trip home she nagged and nagged, telling me at every highway exit to make a right turn and circle back in the opposite direction. (My mistake was to think that the program would be canceled once I got to my original destination and shut off the engine.)

When I finally got home, I pulled out the War and Peace tome that passes for an owner’s manual and tried to figure out how to turn the shrew off. First, I had to pass something of a Miller Analogies Test, trying to discover which of the half-dozen or so drawings of steering wheel configurations matched mine. Was it the one with the crescent-shaped buttons above the square ones? The round ones alongside the rectangles? It took me twenty minutes—the same time as my return trip—to find the right voodoo curse to banish the disembodied voice.

If the automobile is the prime example of technology offering vast amounts of dead trees to explain to new users how it’s all supposed to work, the opposite is the computer. I recently bought a new laptop, and the only two instructions on the napkin-sized accordion set-up folder depicted (a) how to put the battery in and (b) how to attach the AC cord. DUH! But if new computers do not arrive with massive instruction books, they, like new cars, bear gifts that one should beware of. For every advance, something else goes missing. Of course, one only finds out what’s not there any more once one tries to place all one’s defaults on the new computer. Where’s my favorite typeface (Byington)? Gone, even though I’ve used the same Office 2000 software installation disc as on previous computers. Why can’t I print back to front, although I’ve made that my default in three different places? And why can’t I email directly from Word or Open Office, as I could before?

Ah, but the new computer offered one goody: I received with my new purchase a certificate that will allow me, for only fifteen dollars, to upgrade from the Windows 7 operating system to Windows 8 when the latter is introduced this fall.

Posted by normalvision at 5:19 PM No comments:

Face Up To It

I used to be a news junkie. Whenever the news came on TV, I was planted in front of the tube. That is, until the day a reporter for Eyewitness News went to Grand Central Station and started sticking his microphone under the noses of commuters rushing to their trains. He asked them their opinions about something or other that was at issue in the New York State legislature (I have no memory of what the issue was, whether it was ever resolved, or whether—probably the more likely situation— decades later the legislature is still trying to resolve it). As each succeeding opiner mouthed his foolishness into the mic, I got more and more infuriated. “You moron!” I yelled at the TV. “You idiot!” . . . But then I stopped. Who’s the bigger idiot, I suddenly thought, them or me—for sitting there listening to them? I jumped up, clicked off the TV, and have seldom watched a news broadcast since.

I now get most of my news on-line, one of my favorite sites being that of the Guardian over in the UK. I have been moved many times over the past few years to add an on-line comment to one of the paper’s blogs or articles. However, while many of the other readers had cool avatars to append to their user names, I was stuck with a generic. 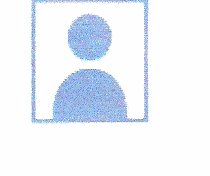 Eventually, I decided to get my own avatar and use it on the Guardian’s site. I thought of a few good ones, but I was foiled every time I tried to upload an image into my profile. So, I just shrugged and contented myself with genericism. Until I recently re-discovered a card that I had received years ago. The image on the card would be my avatar. And this time, I vowed, I would not be foiled. I fought my way through the imaging and uploading process, and finally launched my own avatar. 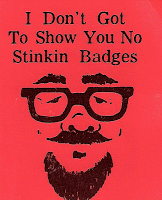 The caricature is of Al “Jazzbeaux” (or, earlier, “Jazzbo”) Collins (who sent me the card), a disc jockey on WNEW (New York) during the 1950s. The words on the card, which became one of Collins’ catchphrases, were his adaptation of some classic dialogue in the film “The Treasure of the Sierra Madre”: “I Don’t Got To Show You No Stinkin Badges.”

Collins had a late-night spot on WNEW, claiming to be broadcasting not from a regular studio but from the “Purple Grotto” many stories below ground. He was accompanied in the purple aura by several strange denizens, including Harrison, a Tasmanian owl, and in a small lake a purple octopus, whose name, if it had one, I don’t remember. One night, when Jazzbeaux was doing the overnight show, he played a recording by a new female vocal quartet, The Chordettes. After the first spin of “Mr Sandman” (http://www.youtube.com/watch?v=xDXT7wC9jrc ) he said something like, “That’s nice; I think I’ll play it again.” And he did—for a total of 55 times during the wee morning hours.

The recording became the number one hit in the country.

Posted by normalvision at 10:08 AM No comments: