In the past few days several items about air travel have flown across my computer screen. First, there was an article on the Atlantic magazine website by Ester Bloom entitled “Why Does Air Travel Make People So Grumpy?”* “Not too long ago,” she reminds us, “flying could be a relatively pleasant experience, but executives focused on cutting costs have stripped away everything flyers associated with luxury or even dignity.”** She points to “[f]ood, baggage handling, boarding in a logical manner” as things “once taken for granted [that] now must be paid for or done without.”

Almost immediately after reading Ms Bloom’s article, I came upon an enticing advertisement for an air travel experience that offered the exact opposite of modern cattlecar air travel. Who wouldn’t want to travel in an “informal, club-like atmosphere,” relaxing in the “pair of slippers provided,” then tucking into the “full-course steak dinner . . . table-served by the two stewardesses aboard”?

So there we are, in our “club in the sky,” sucking on our pipe or blowing smoke rings with our cigar.

Oh, didn't I say? It’s 1953--and the flight is “The Chicago Executive,” operated by United Air Lines (as it was known then), leaving New York City at 5 PM daily and arriving in the Windy City 3 hours and 15 minutes later. 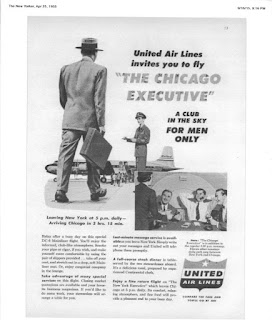 “The Chicago Executive” (and one supposes the return flight, “The New York Executive”) was “FOR MEN ONLY.” Women executives desirous of a 5 PM flight to Chicago had to make do with the regular nonstop flight at that hour. Presumably, they would not be afforded the closing stock market prices or their favorite business magazines, and they probably had to make it through 3 hours and 15 minutes in their own shoes. But I seriously doubt that although they might not have gotten a steak, they had to go hungry.
*
And yesterday I received two emails from United. In the first, Oscar Munoz introduced himself to me (“our valued customer”) as the new president and CEO of United.*** He is all excited about the opportunity “to improve the travel experience essential to the vitality of global business and to the personal lives of millions of people.”

The second email offered me the immediate opportunity to improve my personal life by hopping a United bird to Hawaii. And I’m set to go; I’ve got my suntan lotion and surfboard ready—just need to pick up a flowery shirt. But United has to guarantee me two things: cosy slippers and a table-served steak dinner. Oh, make that three things: women; if women aren't allowed on board, I’m not going either.
***
*http://www.theatlantic.com/business/archive/2015/09/flying-travel-frustration-airlines-customer-service/404986/

**What Ms Bloom does not acknowledge is that she is part of the problem. She relates that “on a recent Ryanair flight, I discovered that not even water was free.” Ryanair is the textbook example of John Ruskin’s observation about price and quality:

There is hardly anything in the world that some man cannot make a little worse and sell a little cheaper, and the people who consider price only are this man's lawful prey.

The result of such practice is a race to the bottom in which everyone else also suffers the consequences.

Ruskin also said (and this was in the 19th Century):

Modern travelling is not travelling at all; it is merely being sent to a place, and very little different from becoming a parcel.

***His predecessor was ousted for some corrupt dealings with a Christie crony.

Posted by normalvision at 8:04 PM No comments: