Visions of sugar-plums danced in their heads

The stockings were hung by the chimney with care

Happy Holidays.
(Half a dozen Fox News people just rolled over in their graves!)

It’s time to focus one’s attention on gift-giving. So, here we will examine history to determine how to select a gift for your favorite Republican.

In his (in)famous 1952 “Checkers” speech (in response to accusations about a political slush fund) Richard Nixon, fighting to remain on the Republican ticket as candidate for the vice-presidency, poor-mouthed that his wife didn’t wear a mink coat but “a respectable Republican cloth coat.” While Pat Nixon shivered through a few winters without a fur wrapping, Dick was apparently always thinking about fashion. For, when he became president in 1969, he decided that the White House police needed a new kit: a “white‐tunicked, gold‐braided, pillbox‐hatted ceremonial uniform.” (1) 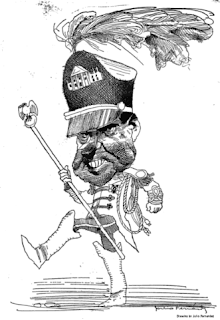 If Nixon was concerned about outfitting those around him, his Supreme Court appointee William Rehnquist was concerned about his own threads. He eventually decided that his sitting on the bench as Chief Justice (after nomination by Ronald Reagan) called for new robing. Here’s the report in the New York Times:

Chief Justice William H. Rehnquist appeared on the bench in a black robe adorned with four gold stripes on each sleeve. The courtroom audience was too polite to point or exclaim, but an explanation was clearly in order and, within hours, the Court's public information office provided one: the Chief Justice had designed a robe after one worn by the Lord Chancellor in a local production of Gilbert and Sullivan's "Iolanthe," and he intended to keep on wearing it. (2)

Gilbert and Sullivan, perhaps, instead of The Student Prince to the Times’ eyes, but to mine, those stripes on the robe reminded me of nothing other than the length-of-service stripes on the ancient waiters at the Gage and Tollner restaurant in downtown Brooklyn. (3)

Having offered advice for gifting Republican fashionistas, we can turn our thoughts (in our not-quite-Martha-Stewart way) to jollying-up GOP office decor.

We can start with a custom hardwood table, chairs, and a hutch for 31,561 taxpayer dollars for that bargain shopper Ben Carson, the secretary of housing and urban development. But for a mega-list of gift ideas we had best turn to recently-resigned (but not lamented) Scott Pruitt, former administrator of the Environmental Protection Agency.

[Pruitt] installed a $43,000 soundproof phone booth in his office that the Government Accountability Office has deemed violates federal spending laws.Another $9,000 was spent sweeping Pruitt’s office for listening bugs and installing biometric locks. Pruitt’s head of security wanted to spend another $70,000 to replace two desks. A total of $1,560 was billed to the EPA for 12 customized silver pens. (4)

Hopefully, this post has eased the burden of your GOP gift selection anxieties. If you somehow forget these particular items, you can’t go wrong by adhering to the following advice:

Make sure it’s costly, unnecessary, tasteless, and paid for by other people.

(1) To the Washington Star the men looked like West German traffic policemen: “One's first inclination ... is to ask, ‘Wo ist der Bahnhof?’” (“Where is the railroad station?”) The Cleveland Plain Dealer thought they looked more like “generals in the banana republics to the south of us.” To the Chicago Daily News they were like movie characters in “a rerun of ‘Graustark’ or ‘The Student Prince,’” the Detroit News found them “unusual but ghastly,” while the Buffalo Evening News said “even ushers at old‐time movie palaces were garbed with greater restraint and better taste.” “Ruritania, D.C.,” scoffed The New York Times.

(3) For decades Brooklyn’s finest would be served she-crab soup, Baltimore broiled clams, English mutton chops and kidneys en brochette by waiters in gold striped uniforms that indicated their length of service, with the Gold Eagle the most prestigious award, signifying 25 years of service.

Posted by normalvision at 6:16 PM No comments:

“Raise your hands, all in favor of declaring that gay people are no longer afflicted with a mental illness.”

Well, it wasn’t done as starkly as that, but as Andrew Scull points out, the declaration “that homosexuality, previously labeled a mental illness, was nothing of the sort” was decided “by a majority vote of America’s psychiatrists,” and thus the second edition of the bible of the profession, the Diagnostic and Statistical Manual of the American Psychiatric Association (DSM), published in 1968, eliminated that diagnosis. It was, Scull writes, “surely an odd way to decide a scientific question, though, to be sure, one that all but the most bigoted would eventually endorse as appropriate.” (1)

A few years before that change in the mental health field, a massive headache afflicted a good number of editors and writers upon first gazing into Webster's Third New International Dictionary, Unabridged, published in 1961 by Merriam-Webster. Those folk were appalled because, as they saw it, the new dictionary left the vast public of English speakers up the language creek without a prescriptive paddle.

To the rescue came a new dictionary, the American Heritage Dictionary. What was special about the AHD was that its parent company gathered together a panel of 105 literati and others to advise “with regard to dubious or controversial locutions.” (2) The voting by the panelists on questions of English usage was, to paraphrase Scull, surely an odd way to decide language questions, the answers to which are not determinable by democratic shows of hands. And what do you do when you have a tug of war over the use of the split infinitive—with half the panel on each side of the rope?

I remember, in that general period of time, that one year when Downbeat, the jazz magazine, was conducting its annual awards poll, one of the magazine’s writers refused to participate in selecting a best trumpeter or best pianist (and the rest), because, he claimed, art is not to be judged like a beauty contest or sporting event. (3) Of course, no one in any artistic field pays any attention to such an argument. So the public is offered a steady diet of meta-lists, as “experts” in the theater and music (and so on) are polled to anoint the BEST actor of all time (Judi Dench, as I recall) or the BEST pianist (Rachmaninov, wasn’t it?)

While one doesn’t expect that the next show of hands by American psychiatrists will decide that gays really are neurotic or psychotic (or whatever), artistic polls (being totally subjective) are quite quixotic. Consider the movies (or should I say “cinema” in this context?): For gazillion years the BEST movie of all time was proclaimed to be “Citizen Kane”; then, out of the blue, in 2016, “Vertigo,” Alfred Hitchcock’s neutron bomb (4) of a movie, topped Sight & Sound’s 10-yearly poll. (5)

How is it, I wonder, that when nothing had changed in ten years (“Vertigo” did not pitch 5 no-hitters, during which time “Citizen Kane” suffered through several prolonged batting slumps) that the former film could leapfrog over the latter?

All who proclaim “Total Bollocks” raise your hand.

As for me, I have more faith in magazine polls that list New Jersey’s best dentists.

(3) I don’t recall which writer it was (perhaps Leonard Feather), and, even more regretfully, I don’t recall his exact argument. So, I offer the assumed explanation above with fingers crossed that I came close to his argument.

(4) “A weapon that killed [people] by irradiation while sparing property.”
https://www.britannica.com/technology/neutron-bomb
I fully expect to discuss “Vertigo” in a future post, but today’s my birthday, and I don’t want to have to deal further right now with that dud of a film.

Posted by normalvision at 5:31 PM No comments: