I recently watched a half-century-old movie comedy and a much-more-recent TV police procedural drama in both of which the police race their cars onto an airstrip in an attempt to cut off the escape of the criminals by plane. In both cases the police fail, and the criminals fly off unapprehended.


Lucky escapes? Hardly. The creators* willed it so. In the case of the comedy, the escape allowed for a gloriously goofy conclusion on a tropical island. And in the case of the police drama, it produced for the lead detective, in the following episode, career complications and suspicions about his staff’s loyalty.


Fictional policemen and detectives do not catch criminals--even when they do catch criminals. Their creators structure the works to have the crimes solved and criminals brought to justice (not always the same thing)--or not. As Molly McArdle** points out, sometimes their creators do not allow the greatest of fictional detectives to solve a case: “Like [Sherlock] Holmes, [Hercule] Poirot has one emblematic failure to keep him honest and relatively humble.”*** Each detective may have an “emblematic failure,” but it is not really his doing. Conan Doyle and Christie fashioned it so. But if the failures are not the detectives’, can the successes be theirs? Obviously not. Again, it is the creators who, in the first place, created the crime and criminal and then plotted how the detective by dogged legwork or cool ratiocination (or both) will unravel the mystery.


Like me, Sophie Scott, who reviewed Mastermind: How to Think Like Sherlock Holmes by Maria Konnikova for the Observer****, is a “tiresome person” who “might point out that, as Holmes was not a real person, at least some of his expertise might arise from his creator knowing the answers to the puzzles.” She goes on:


Konnikova, however, says that as amazing feats of insight were achieved by Conan Doyle and some of his contemporaries, we can safely suspend our disbelief. I found this difficult to do.


Fictional characters have no agency. Like the pieces on a chessboard, their latent powers are only realized when advanced by an outside force. Holmes’ intellectual powers are as impotent as a chess queen’s in an empty room until Conan Doyle sets them into play.


John Dickson Carr was recognized as the master devisor of the locked-room mystery, in which the crime occurs in impossible circumstances and, thus, there is seemingly no way to explain it and solve it. But, of course, there is a solution, which the author has conceived together with the puzzle. The mastermind is the author, who dazzles the reader with his trickery, pulling a logical explanation out of a locked room, like a magician pulling a rabbit out of an empty hat. The detective is his magic wand. Essentially a prop.


But sometimes the creators falter in their legerdemain, though the audience, having bought the idea of the detective’s super reasoning powers, will most likely not pick up on the flawed performance. One example: In a 1974 episode of Columbo, entitled “An Exercise in Fatality,” the rumpled police lieutenant “solves” the murder by determining that the laces of the victim’s sneakers were tied post mortem by another person (because of the way the loops go). And his reasoning is correct—for a right-handed murderer and a right-handed victim (which is what he demonstrates). However, it all breaks down (if anybody is carefully looking), because the victim was played by Philip Bruns—a left-handed actor. 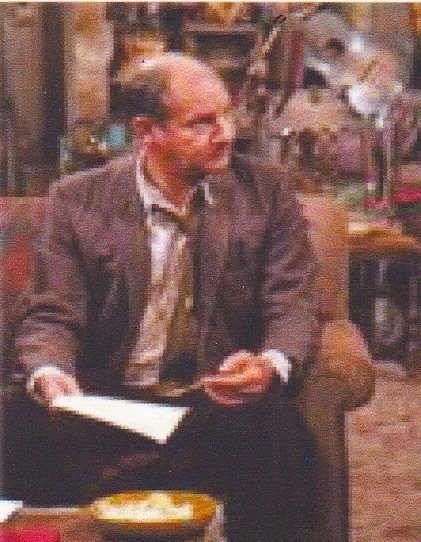 (This picture of Bruns is from an episode of Sanford and Son, but even so . . .)
Even a half-sober defense attorney could get an acquittal when that case came to trial.


I don’t know if I can be a mastermind, as Sherlock Holmes is alleged to have been, even if I practiced hard, but I can definitely out-think Columbo!


*Since movies and television are collaborative arts, several different people (writers, directors, producers) may have contributed to the outcomes; therefore, I decided to play it safe and just say “creators” when dealing with those media.


***P. D. James created a case which Adam Dalgleish “solves” but doesn’t have enough hard evidence to bring about an arrest. And (at least in a French TV series) Georges Simenon‘s Maigret literally walks away from a murderer, allowing him to fish in freedom.