Lying on his hospital bed staring up at the cracks in the ceiling, Alan Grant was one very disconsolate copper. The books that friends had brought him to pass the time elicited not a whit of interest in him. The Scotland Yard detective, having fallen through a trap door in pursuit of a small-time criminal, was—maddeningly—hors de combat.

Relief from boredom—if not from the prison of his hospital bed—came when a friend brought him, instead of another unreadable book, a collection of reproductions of old portrait paintings:
“Faces . . . . Dozens of faces for you. Men, women, and children. All sorts, conditions, and sizes.”
It was the friend’s idea that Grant, who had made a “conscious study” of faces could winkle out some possible solutions to historical mysteries by his examination of the portraits. However, none of them aroused his curiosity until he came upon this one: 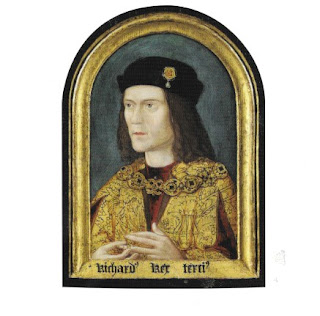 “A judge? A soldier? A prince?” But when Grant turned the picture over and read the name of the subject, he was taken aback to learn that this man who Grant assessed as “[s]omeone used to great responsibility, and responsible in his authority. Someone too conscientious” was the notorious Richard III.

And so The Daughter of Time by Josephine Tey unfolds as Grant searches for the truth about the alleged villainy (which he didn’t perceive in his face) of the last Plantagenet king of England.
*

I see this sense of privilege in the child’s eyes, and it cuts to some core, sick emotions connected with race in America that I think are still with us today.—Carolyn Drake

This photograph captures the essence of racism and servitude in America
for all time. The contrast between the expression of cold entitlement on the very white baby’s face and the calm resignation of the black nurse who is holding her only amplifies the great difference in their skin color and positions in life.—Mary Ellen Mark*

This is the photograph that those two photographers were commenting on [it is from The Americans by Robert Frank]: 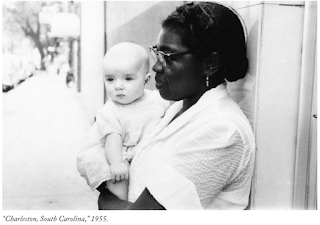 I’m sorry—but this is crazy. A baby with no hair, who can’t even walk,** but has a “sense of privilege” in its eyes and an “expression of cold entitlement” on its face! (I wonder what Alan Grant would find there.) Let us attack racism for the beastliness it was in Charlestown, South Carolina in 1955 and for what it still is today. But let’s pick the right symbols and language.
*

Here’s a photograph I took in New York City about two decades after Frank took his: 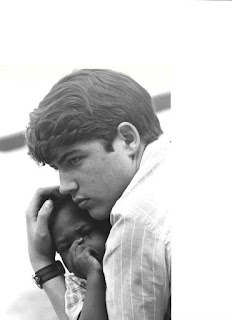 Macbeth: ”There’s no art/ To find the mind’s construction in the face.”

Posted by normalvision at 6:57 PM No comments: