In the previous blog post (http://drnormalvision.blogspot.com/2014/11/clip-joints.html) I quoted an anecdote by the poet Charles Simic about a visit to a barbershop. In this post are tales of three of my visits to the barber's.

*
“I was called in by the parish priest,” the customer in the chair to my left said to the barber. The Monsignor wanted to know why the man and his wife had only one child. In their present financial condition, the man explained, they could not afford to have any more children.

“But the Good Lord will provide,” contended the priest.

“Meanwhile, Father, I'm the Good Lord.”
*
Having to wait my turn, I rooted among the magazines on the coffee table to find something enlightening to read. And I did: the April 1973 issue of Playboy magazine, in which I discovered a lengthy interview with Tennessee Williams. (I did not realize that I was supposed to examine the lady with the staple in her navel.) The one fact from that interview that I carried away with me--and referred to often in my Shakespeare classes--was that we have on record, as confessed by the playwright himself, the occasion of Williams' first orgasm.

So, here's how things stand: we know when the man who is possibly America's greatest playwright (argue about it amongst yourselves later, folks) had his first orgasm—but we don't know for certain the exact date of birth of the greatest playwright in the English language. Oh, the calendars that bother at all will mark April 23 as the date of his birth (we do know for certain that he died on an April 23), but that birth date is merely a supposition, working backwards from the date of his baptism, which was recorded (April 26).

It is one of the great intellectual fallacies that people are prone to: believing that as things are now, so were they then. If we know almost every tidbit about the lives of modern authors, shouldn't we know everything (or a hell of a lot) about the lives of earlier great authors? But there was no 16th/17th Century People magazine or “Tonight” show (or equivalents of other outposts of modern celebrity culture). (“Well, Johnny or Jay or whoever, I'm thinking about adapting this old Italian play about two lovers who have problems with their families.”) And since nature abhors a vacuum (thank you, Aristotle) lots of determined (i.e., deluded) people have rushed in over the next four centuries to fill in the “facts” of Shakespeare's life.*
*
July 1973. A small black-and-white television set was tuned into the Senate Watergate hearings. The new witness was an aide to H.R. Haldeman, President Nixon's Chief of Staff, by the name of Gordon C. Strachan,** who was just about to celebrate his thirtieth birthday. Suddenly, the barber to my right pointed to the screen and exclaimed, “He has long hair!” While Strachan's locks were hardly Beatlesque, they were in the context of the Nixon White House (his boss, Haldeman, was noted for his severe crew cut) flowing.

It seemed to me to be perfectly right that the first thing a barber would notice--even in the turmoil of a Constitutional crisis--is a witness' hair. This feeling of mine was substantiated many years later when I was engaged in conversation with a department store saleslady. She told me that what she paid attention to while recently waiting for her daughter's arrival at the airport was the luggage of the passengers. We were conversing, of course, in the luggage department.
***
*S. Schoenbaum's book Shakespeare's Lives is a brilliant historical survey of both the reasonable suggestions and the irrational flights of fancy that have been offered as biographical possibilities (or, in many fanciful cases, "certitudes").

(For what it's worth, this post was not written by the Earl of Oxford.)

**Not to be confused with Gordon (“Wee Gordie”) Strachan, the manager of Scotland's national football team. (See http://drnormalvision.blogspot.com/2010/08/velocity.html) 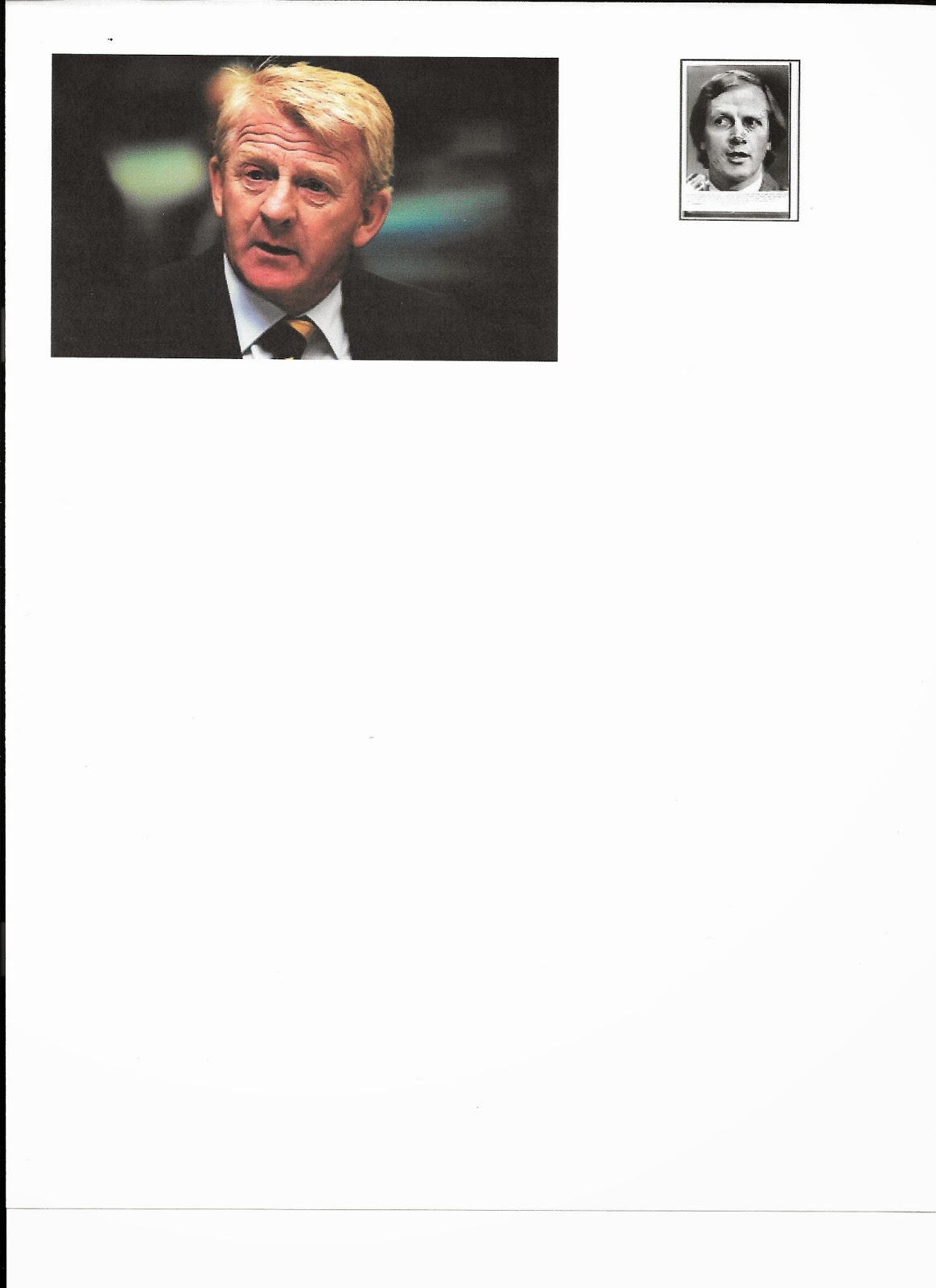 Posted by normalvision at 6:53 PM No comments:

“Learn Barbering and make Money,” the sign said. Blind as I am without my glasses, the apprentice barber had cut off half of my hair with electric clippers, leaving just a tuft in front, before I realized what was happening to my head. He may have been a hair fashion visionary decades ahead of his time, but I was left in total panic. As soon as I paid my thirty-five cents, I rushed across the street to Klein’s department store and bought a beret, which I wore for the next couple of months pulled down over my ears.
Charles Simic*

***
A couple of decades ago I had a regular tennis game on Thursday nights. On the court next to us there was a doubles group—three doctors and a lawyer, I believe, not that that is of any importance. A few times over the years the teenaged son of one of the medicos substituted for an absentee adult. Engaged in my own game, I only rarely picked up tidbits of conversation from the adjacent court. On the last occasion that I recall the son being there, however, before their match got under way I overheard one of the men ask him—he had just entered college (an Ivy League institution)--how things were going at his new school. He thought things were fine, but added that only one of his five instructors was a native English speaker. He was obviously referring to the teaching assistants who did most of the classroom teaching after the big deal faculty addressed large masses in lecture halls.

I, for my sins, had spent my time earlier that day teaching at a Gothic-towered (but non-Ivy) institution of alleged higher education, where the overwhelming majority of classes were taught by tenured or tenure-track faculty—and at at much lower cost to the students.

It is unfortunate that big-name universities are not as honest as barber colleges. At least at the latter the customer who submits his head to the care (or ineptitude) of an apprentice is charged merely a nominal sum. Too many universities are more adept at trimming wallets than barber colleges are at trimming hair.
***
*http://www.nybooks.com/blogs/nyrblog/2014/oct/08/new-york-memories/?insrc=hpbl

Posted by normalvision at 6:03 PM No comments:

The Economist admitted to perplexity earlier this year in its obituary of Charles Keating. He was “Mr. Clean,” a “moral crusader,” a “knight on a white charger—as he saw himself,” who waged war on obscenity and pornography. He was, said The Economist, “so doughty in this holy war that Richard Nixon appointed him in 1969 to the national commission on obscenity.” He was also a generous donor to the Catholic Church (“Sundays saw him devoutly at Mass”) and the University of Cincinnati and had given “at least $1m to Mother Teresa, who in return praised his good character.”

He was eventually convicted on 17 counts of fraud and sent to prison.
*
Is the case of Robert Brennan also “strange”?

In 1973 he gave $10 million dollars to St. Benedict's Preparatory School in Newark, NJ (as well as a shedload of moolah over the years to Seton Hall University), only to find himself two decades later before a federal court judge and fined $75 million for defrauding investors. His legal troubles didn't end there. USA TODAY summed up his downfall:

He was arrested in 2000 for failing to disclose all of his assets on his bankruptcy petition. He was found guilty a year later of bankruptcy fraud, money laundering and obstructing justice and sentenced to nine years in prison.

*
In this week's New Yorker, Rachel Aviv tells the story of Sam Kellner, an orthodox Jew, who sought justice for his son. The boy was sexually molested by “a prominent cantor,” who is a“descendant of a rabbinic dynasty.” When the boy first revealed to his teacher what had happened to him, “the teacher said that [Baruch] Lebovits [the accused] was a 'respected person' and instructed him not to think about the incident again.”

Lebovits was eventually brought to trial and found guilty on eight counts of sexual abuse. He served eighteen months before the jury's verdict was overturned on appeal on procedural grounds; later, however, Lebovits copped a guilty plea and received a two-year sentence, but he served only eighty-three days.

Aviv points out that before the original sentencing (which came to “a total of up to thirty-two years”),

nearly eighty people sent letters to the judge, requesting mercy for Lebovits. They described him as charitable, kind, blessed with a beautiful singing voice . . .

Is this case “strange” as well? Another religious, charitable person (of course it's real easy being charitable with other people's money) who was a malignant blot on society?
*
As was often the case, George Orwell got there first:

Saints should always be judged guilty until they are proved innocent.