Anthony Tommasini, a music critic of the New York Times and opera buff, has written a recent article in which he chooses to “speculate on what happens after the final curtain falls” on several favorite operas, such as Rigoletto.

In the last moments of the opera as traditionally staged, [Tommasini explains] Rigoletto, a hunchbacked jester, hears the lecherous Duke of Mantua singing in the distance. Rigoletto realizes that the body in the sack he is dragging to the river cannot be the Duke, whose assassination he ordered to avenge his daughter’s honor. To his horror, it is his daughter, Gilda, who, in the throes of passion and shame, has sacrificed herself for the Duke.

But what happens after the opera ends? Will Rigoletto try again to have the Duke killed? Or kill himself?

Will the Duke continue his life of entitlement and debauchery, seducing any woman who intrigues him?

Well, what happens after the opera ends is that everybody takes off his make-up and goes home.

“A work of art contains its own logic”--Eric Bentley

"All art is a matter of choice”--Harold Gotthelf

*
To expect the characters of an opera or play or novel to continue to have life and to continue to act after the artistic work has concluded is pure nonsense. Fictional characters are just that--fictions--who exist strictly within the bounds set by their creators. Lady Chatterley can’t traipse away after Lawrence’s final period and go off to teach Esperanto. She is locked up within the pages of the novel that bears her name. It’s a fun parlor game to play “What Happens Next?” with literary characters:

Horatio tours Denmark explaining to the citizens the (delayed) actions of Hamlet.

The Montagues and the Capulets dispute the siting of the memorial statues of Romeo and Juliet, and so they never get built.

Vladimir and Estragon receive a text message from Godot: “Meet at Burger King.”

And so on and so forth.

Yes, it's a fun game; unfortunately too many people take it seriously.

The writers (playwrights, librettists, novelists, etc.) have made up their own minds where to begin their story and where to end it. The play (opera) ends here! Curtain! Tommasini's wanting to look behind the curtain reminds me of the mild panic some fans of the Sopranos exhibited when David Chase pulled off the TV equivalent of a quick curtain—the final blackout screen. They insisted that something must being going on behind the screen. If only they could see the scraps that ended up on the cutting room floor—then they'd know.

"I remember asking [Harold] Pinter about my character. Where does he come from? Where is he going to? What can you tell me about him that will give me more understanding? And Harold just said, ‘Mind your own fucking business. Concentrate on what’s there.’”

(There are several versions of this anecdote with minor word changes.)

*
If the writer doesn't want the audience to know what went on before the story, then it's not part of the story. And just as Pinter exploded about the beginning of his play, we must imagine that the writer would be just as furious at tampering with his ending. If the writer doesn't want a mystery to be solved, an enigma deciphered, a paradox un-paradoxed, then so be it; the writer can live with uncertainty. If that is his view of things, the audience, instead of denying him his vision, should honor it.

At the end of the movie Kind Hearts and Coronets Louis (Dennis Price) has to choose between wife (Valerie Hobson) and mistress (Joan Greenwood). Who will he opt for (with accompanying consequences)? Curtain! The dilemma is the point—not the resolving of it. To promote a guessing contest about whether he lived happily (or unhappily) with Edith or Sibella—or even lived--is to selfishly usurp the artist's prerogative. It is a form of solipsism.

A writer chooses where to begin, and where to end.

Or as Tommasini would know from Pagliacci:

Posted by normalvision at 1:44 PM No comments:

You know the old joke about the mother exclaiming to her neighbor about her son's feat during the school band's performance in the town’s parade? “My Herbie was the only member of the trombone section who was in step!”
***
The other day I received in the mail the opportunity to purchase for $2.98 (instead of $5.95) a book entitled 100 Words Almost Everyone Mispronounces. I declined to purchase said book--not because I was feeling parsimonious that afternoon but because it was a “Herbie” book. I did not even have to think twice about whether I wished to be in step with the authors or with the “Almost Everyone” so sneeringly put down in the title. The book’s assertion that what “Almost Everyone” who speaks a language does can be declared wrong is so patently absurd that only people like the mother of a Herbie or an Edward S. Gould (or modern Gould-digger) cannot see through it.

"Another blunder, of which the instances are innumerable, is the misplacing of the word only. Indeed, this is so common, so absolutely universal, one may almost say that “only” cannot be found in its proper place in any book within the whole range of English literature …."]

***
Another who might not recognize the “absolutely universal” is the stick figure in the famous advertisements for the now-defunct Philadelphia Bulletin newspaper, whose catchphrase was: “In Philadelphia nearly everybody reads The Bulletin." 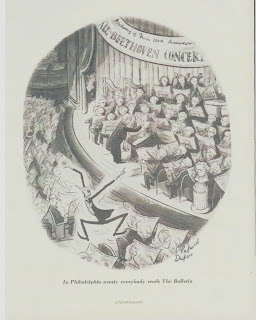 ***
I have purposely, until now, declined to identify the authors of the $2.98 bargain book. They are the “American Heritage Editors,” who are, I imagine, the same people responsible for the dictionary of the same name. You will, of course, give that tome a wide berth; if you are looking for the best American dictionary, you will want to get one published by Merriam-Webster. (Note: anyone can use the name “Webster” in a dictionary title, so you want to watch for that “Merriam” bit.) The best $19 or so that you can spend on the English language would be for Webster's Dictionary of English Usage, which does not prescribe usages out of the blue, but offers historical-based discussions and examples of what writers have actually done (for example, contra Gould's screed against the “misplaced” only, the DEU offers evidence otherwise from the works of authors ranging from Dryden to T. S. Eliot and beyond).
***
My guess is that Herbie was not only out of step, but also out of tune.


Posted by normalvision at 6:07 PM No comments: