Today we have on the phone a special guest—Jesus of Nazareth.

Us: Thanks for taking time to chat with us, Jesus. I hope we haven’t interrupted anything important.

Jesus: Nah. I was just turning some water into wine—Cabernet Sauvignon, as a matter of fact. Not bad, if I say so myself.

Us: We wanted to speak to you because your name has popped in the news again . . .

Us: Yeah. You have been reported as having been seen in the fire at the roof of Notre Dame de Paris the other day.*

Jesus: What day was that?

Jesus: Monday is laundry day. I was down at the Sea of Galilee washing the sheets. Besides—and this is important—I am camera-shy. I have not had a picture taken of me since the fourth grade.

Us: Let me get this straight—does that mean that all those icons and such aren’t you?

Jesus: Can’t be. Some guy with a Leica once tried to sneak a photo, but Luke collared him and dispatched him with a boot up the backside.

Us: Well, how about that daVinci painting called “Salvator Mundi,”** which sold for $450 million at auction in 2017? That’s not you either? 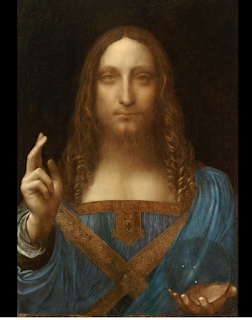 Jesus: You gotta be kiddin’. The guy in the painting looks like some kind of stoner. Me? Ha! And for $450 million? Do you know how many loaves and fishes you could have gotten?

Us: Anyway, to change the subject—The New York Times has published a story about clergymen sporting luxury sneakers and other rich apparel:

Carl Lentz, the pastor who baptized Justin Bieber in a professional basketball player’s bath tub, appeared wearing a pair of Nike Air Fear of God sneakers that were selling online for about $500. Then John Gray, a pastor from South Carolina, was shown in blood-red Air Yeezy 2s, the sneakers made in collaboration with Kanye West, that were going for upward of $5,000. And in another photo, Chad Veach, who preaches in Los Angeles, had a $1,900 Gucci bag and wore $795 pants.***

Jesus: You’re putting me on, right? I mean, we’re really far away from that Assisi guy. You know, around here we go around barefoot most of the time; we have sandals that we wear when we have to walk long distances, just basic leather things—no Birkenstocks and such. I will admit that I had an old pair of Keds once that some tourist had left behind. But they quickly disintegrated. Anyway, I like to wiggle my little piggies.

Us: OK. Thank you for your time, Jesus. I know that you must be busy with Passover and Easter coming up . . . Oops, sorry about that.

Jesus: Yeah. This weekend is a bummer. But I like to think I rise above it. Ciao.

Posted by normalvision at 2:07 PM